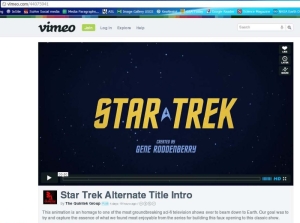 Yes, I have been and always shall be a Star Trek fan — born just soon enough to have it become part of my brain structure, my Zeitgeist. Yes, my last two cats, a black female and an orange-tabby male, were named Nyota and Tiberius. Yes, I wanted to be Lt. Uhura or maybe Mr. Spock when I was growing up. Yes, I can tell which re-run episode is up within, say, the first 10 seconds. Yes, I am upset that the actress* playing Lt. Uhura in the new movie series  bears little resemblance to the original character. OK, already, is that enough? Do I have to confess further? Oh, and I think this new animation of the original opening credits is #neato.

*The inarguably talented and beautiful Zoë Saldana is neither as voluptuous nor as dark-skinned as the gorgeous Nichelle Nichols. Also, the original Nyota Uhura was sweet and kind as well as strong and smart; the new Uhura seems a bit too angry to me. And Uhura would never have gone for Spock!  [[edited after original post]]